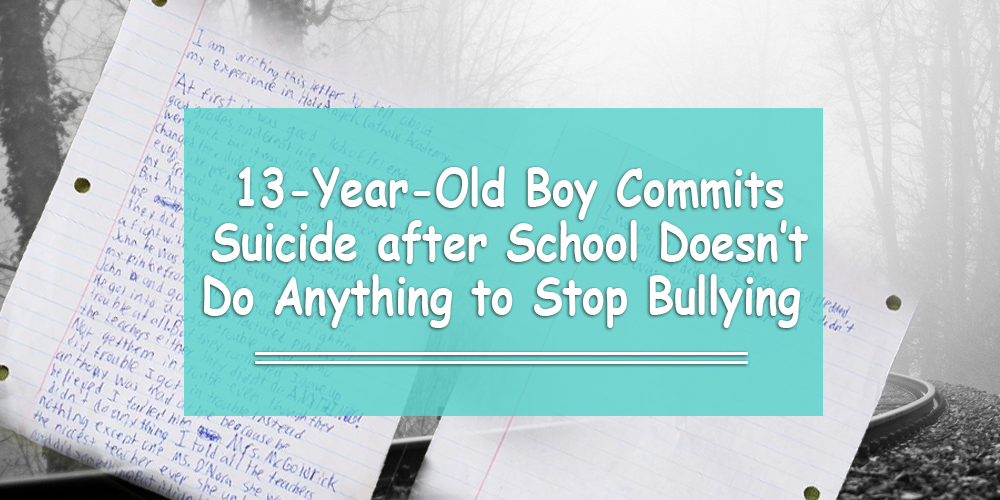 Daniel Fitzpatrick, a 13-year-old boy from Staten Island, New York, is making headline news because he took his own life after writing a letter saying that his teachers didn’t do anything about being bullied by (at least) 5 other boys.

His older sister found him hanging with a belt around his neck in an attic.

He left behind a letter explaining his story. This is what he said:

“I am writing this letter to [talk] about my experience in Holy Angels Catholic Academy.

At first it was good. Lots of friends, good grades and great life. But I moved and went back but it was different. My old friends changed they didn’t talk to me. They didn’t even like me. 6th Grade comes. Anthony, my friend, he failed and I failed too. But Anthony took it out on me. He bullied me along with John, Marco, Jose, and Jack. They did it constantly until I went into a fight with Anthony. Everyone stopped except John. He was angry. I ended [up] getting x-rays for my pinkie from John. I ended up fighting John and got a fractured pinkie. He got into a lot of trouble. As for me no trouble at all. But they continued. I gave up. The teachers either they didn’t do ANYTHING! Not get them in trouble even though they did trouble. I got in trouble instead. Anthony was mad at me because he believed I failed him. Mrs. McGoldrick didn’t do anything. I told all the teachers nothing except one Mr. D’Alora she was the nicest teacher ever. She understood and did something. But it didn’t last long.

I wanted to get out. I begged and pleaded. Eventually, I did get [out]. I failed, but I didn’t care I was out. That’s all [I] wanted.” This story of Daniel Fitzpatrick is incredibly tragic. He was only 13 years old!

The most troubling part about Daniel’s story is that the teachers didn’t do anything to stop it. More and more, we are finding teachers who aren’t taking responsibility… even with all of this awareness about the effects of bullying, even when a student literally tells them that they are facing a problem.

As teachers, it’s important to understand that bullying is wrong and that it has serious consequences if nothing is done. This story involves traditional bullying, where students victimized their classmate face-to-face. However, bullies can now get away with so much more as they can pick on their victims when they’re not in the same room thanks to social media and the Internet.

This is a call to action for teachers: please talk to your students about bullying… especially cyberbullying. It is a serious problem that is only bound to get worse if nothing gets done.