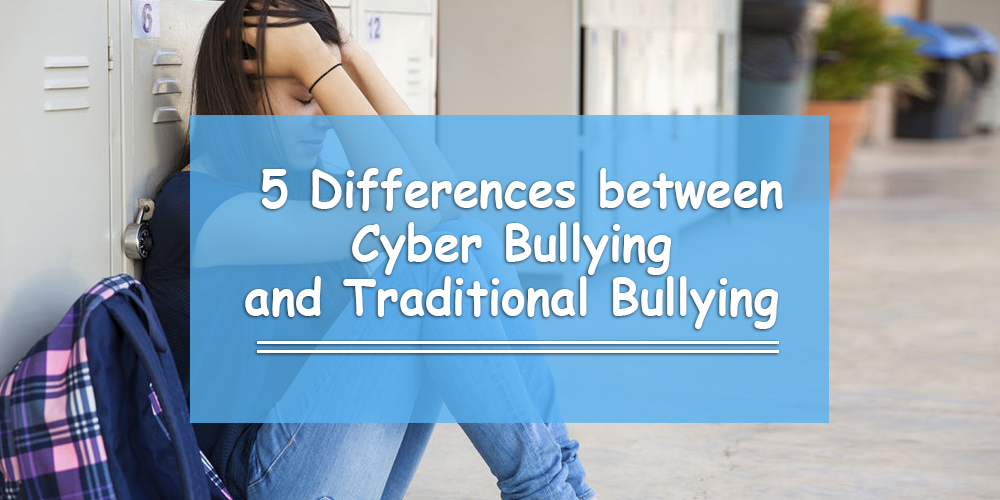 The methods [of bullying] used [online] are limited only by the child’s imagination and access to technology.

The fact that we even ask ourselves this question implies that there are some key differences… and there are. Cyber bullying is arguably a lot more dangerous because it is a relatively new phenomenon. Not a lot of people know how to handle cyber bullying when they see it.

This is why we have come up with a list of the top 5 differences between cyber bullying and traditional bullying.

Disclaimer: Before reading any further, be sure to understand what cyber bullying really is and why it is important. There is a teens version, a parents version, and a teachers version.

How Cyber Bullying and Traditional Bullying Are Similar

Before pointing out the differences between online bullying and the real world bullying before the Internet, it might be important to understand some of their similarities.

The main thing they have in common is the obvious element: bullying. In both cases of bullying, the bully uses threatening or mean acts of agression designed to cause harm towards someone else (the victim). They know what they are doing and, in both cases, they have the intention of causing their victims pain.

2. The Effects of Either Type of Bullying Are Similar

With the intentions of the same for both traditional bullying and cyber bullying, they have similar effects on the victim as well. People who get picked on usually experience depression, loneliness, changes in eating and sleeping patterns, and a loss of interest in activities they used to enjoy.

This is usally due to the third reason why cyber bullying and traditional bullying are similar:

When it comes to bullying, this does not usually refer to an single incident. This is an act that happens over and over again, to the point where it has severe effects on the bully’s target. The effects get worse for the victim as the bully shows no remorse what they do… whether it’s online or in person.

This leads to the fourth and final similarity:

Traditional bullying and cyberbullying have similar relationships when it comes to power structure, and it is always in favor of the bully. Bullies will only pick on those who they think are weaker than they are. It could be for whatever reason, but bullies are usually aggressive and they tend to target passive victims in situations where the victim cannot defend themselves.

Bullies usually don’t attack their targets unless they feel like they have the power. In all other cases, they are afraid and think they might suffer consequences for their actions, because they know what they’re doing is wrong.

So far, we learned about the main similarities between traditional bullying and cyber bullying.

But now it’s time to examine some of their differences, particularly the differences that make cyber bullying more frightening.

The Differences between Cyber Bullying and Traditional Bullying

1. Anonymity: How the Internet Protects the Bully

The biggest difference between cyber bullying and traditional bullying is the fact that the Internet actually gives the offender an extra degree of protection.

Why? Because when you’re on the Internet, bullies can harass and attack their targets anonymously.

Back in the ‘traditional bullying’ days, at least victims knew who their aggressor was. Now, the victims are clearly identifiable online (whether it’s through their phone number or one of their social media profiles) and cyber bullies can hide their identities while harassing that person.

Another difference between cyber bullying and traditional bullying is that cyber bullying can happen anywhere. As long as someone has access to the Internet, a bully can harass someone and a victim can find an offensive comment about them.

Before everyone had easy access to the Internet, bullying was more isolated. It typically happened during school hours and in places where the bully and victim were in the same location.

In today’s age, there is literally nowhere to hide if you are a victim of bullying. Someone could find a message from a cyber bully from the moment they wake up until the time they go to sleep. They could find one during school hours and/or in the privacy of their own home.

This, of course, make it very difficult to avoid cyber bullying, and it can it could potentially happen to someone constantly.

Have you ever seen an image or meme go viral before?

While people can be hostile both online or offline, one of the other key differences between cyber bullying and traditional bullying is the fact that things can be shared easily.

Some of the nastiest online bullies expose their victims in front of the entire virtual world.

While most traditional bullying takes place in front of a relatively small number of witnesses, cyberbullying plays out in front of anyone who has access to the Internet and comes across a cyber bully’s post.

What’s worse is that most people don’t do anything about it simply because they feel like nothing can be done online. Some people even play a role in sharing some of these hurtful messages, and posts to their friends, which gives the victim even more negative exposure.

(Side Note: If you are a teen, make sure you read this article about bystanders, which discusses why you should take action against cyber bullies even if you aren’t the one being bullied.)

4. There Is a Lot Less Remorse in the Online World

Generally, solving a problem that happens online is very different from what happens in the real world. The Internet is still a relatively new phenomenon for most people, and it is constantly changing based on how we react to it.

Nowadays, people seem to believe that there are worse reprocussions for cyber bullying compared to traditional bullying. Victims are less likely to tell their parents or teachers about a cyber bullying incident because they may fear that they’ll receive a worse punishment, like having their computer or phone taken away.

Furthermore, because cyber bullies don’t have face-to-face encounters with their victim, they are also less likely to feel guilty for what they do. In other words, they do not know how their words or actions actually affect someone else online. This leads to bullies being more aggressive and victims being more vulnerable.

As people still attempt to understand everything about the online world and the Information Age, there is still one key difference between cyber bullying and traditional bullying. It lies in the very essence of what every Internet safety organization recommends: saving the evidence.

Although some differences between cyber bullying and traditional bullying may pose threats about whether we should use social media, organizations have now made it easier for people to document cyber bullying incidents and report them to the proper authorities.

Cyber bullying may be dangerous and a little more difficult to prevent right now, but that’s exactly why we should take this seriously and combat these forms of bullying together. As students, parents, teachers and school administrators, it is important to have open paths of communication with everyone and to continue talking about how to prevent cyber bullying from happening.

Here are a few things to keep in mind while you’re online to help prevent cyber bullying:

Respect others online: you cannot see the effect your comment/share will have.

Remember that what you post online stays online; you cannot take anything back once it’s uploaded.

Be a good digital citizen. You will be responsible for everything you post (and everything you ever posted). Think about different perspectives before you post, as well as how people may react to it.