Amanda Todd: A Name We Will Never Forget (Cyberbullying/Suicide Story) 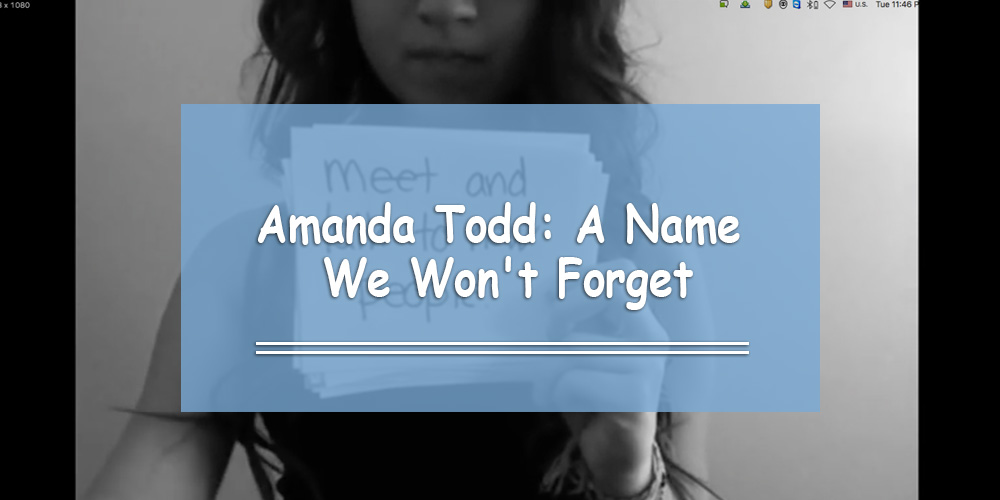 Amanda Todd. Some people may not know who she is. If the name rings a bell, then it’s probably because you remember her horrifying story. After flashing someone on camera, the 15-year-old from Canada fell victim to sextortion. A man threatened to post inappropriate images of her on the Internet. Afterwards, she suffered years of constant bullying… both online and in real life.

Amanda Todd posted her story on YouTube (in the form of flash cards) on September 7, 2012.

This is what happened step by step:

That a truly sad ending. And it gets worse.

What Happened after Amanda Todd Posted Her Video?

On October 10, 2012 (just over a month after she posted her viral video), she committed suicide.

She is now a household name in the Western World. Others have posted their stories in flashcard format before (to help express themselves and seek help from people), but the tragedy that went along with this (specifically her death) is what shocked most people.

What’s even more appalling is – after she died – there was a Facebook page called “B**** Please, Do You Even Amanda Todd?” (This referred to the part in her video where she said she drank bleach in an attempt to kill herself.) The page consisted of angry comments and memes mocking her suicide. Over 2,000 people followed the page before Facebook removed it.

The Fine Brothers posted a video on their YouTube channel recording teenagers (ages 15-18).

Here is a summary of some of the most inspirational moments in the video, along with some conversational points from Online Sense:

Why Are People Still Saying Bad Things about Amanda Todd

• “They just want a reaction. That’s what they really feed off of.”
• “It’s another form of cyberbullying that needs to be monitored by parents.”
• “People have no repercussions for what they say on the Internet. That’s why people leave horrible comments on these videos: because they feel like nothing bad is going to happen to them because of it.”

These three points sum up how many people perceive certain portions of the Internet, particularly social media. Cyberbullies – particularly trolls – post mean and nasty comments because they feed off of other people’s negative reactions. People wouldn’t say those things if they weren’t feeling hurt themselves. Just as Jamie Lee Curtis says in the beginning of this video: “Hurt people hurt people.”

Combine that with the fact that the Internet gives people the power to be anyone they want to be online and post anonymously. Of course, you will see hateful things online posted by people who don’t reveal their identity.

What Should Happen to the People Who Leave These Types of Comments?

• “Something should happen to them’ – some form of punishment – but the reality is nothing is going to happen.”
• “[These social media websites] have no control over [what kids say], but they are providing a resource to let [this] happen.”

It has been four years since the death of Amanda Todd. Maybe the perception back then was that people couldn’t control what Internet users say. However, there has been a lot of research and development to help track people’s comments and suffer serious consequences because of it. In fact, one person in Canada got fired for commenting negatively on her death: “It’s about time this b**** died.”

Governments around the world (including the UAE) now have laws that implement harsh penalties on cyberbullies and sextortionists.

In addition, social media networks continue to work on new features to give people more authority of their own online profiles. For example, Instagram came out with a comment moderation tool in 2016. Twitter also came out with a ‘Quality Feature’.

• “Like Amanda Todd, you can take your own life. It’s a serious topic. It’s not ‘kids being kids.’”
• “Bullying should be presented in [governments]. If we treated [cyberbullying] like we do with drugs or alcohol, it would be so much different.”

Bullying has been happening for a really long time. However, this story truly shows just how big of an impact your actions have, whether they happen online or in real life. The line gets thinner and thinner as every year passes. So the teens are definitely right in this case: bullying is definitely not something to shrug off… especially in this day and age.

How Can Kids and Parents Make the Situation Better?

• “Kids and teens need to tell their parents when they’re bullied, because the parents can do something about it.”
• “Start when they’re younger and train them to always be open with you … so you always know what’s going on.”
• “[What parents know is] like an iceberg. They only know [a small piece] of the Internet, which involves Myspace, Facebook, YouTube, etc. Then once you actually reach [deeper], you see this huge that involves sites like 4chan … Parents think they know the Internet. They have no idea!”

Many people are fortunate enough to have someone who truly cares about them. However, it might be hard to open up to them, especially when you’re at your most vulnerable stage.

Even if you feel like it isn’t anything as serious as Amanda Todd, it’s always good to have someone listen to you. It could be a family member, a friend, a teacher, or even a random stranger who is trained professional to guide you through your own healing process.

They might not have all the answers, and they might not know everything about the Internet, but they can definitely lead you to a path in the right direction. And that’s what matters.

What Would You Say to Someone Who’s Being Bullied?

This was the final question asked in the interview. There are some very strong messages that the teens mentioned:
• “When it comes down to it, you’re in charge of who you are and what you do; not them.”
• “Everyone goes through this. So don’t feel like you’re the only one out there.”
• “This is just a tiny period in your life, and you have so much to live for.”
• “Suicide is not the answer, because even if you feel like you have nothing to live for anymore, there always will be.”

Here is the transcript of the story Amanda Todd gave:

Hello. I’ve decided to tell you about my never ending story. In 7th grade I would go with friends on webcam, meet and talk to new people online. I got called stunning, beautiful, perfect etc. They wanted me to flash.

One year later, I got a message on Facebook. From him. I don’t know he knew me.

It said, “If you don’t put on a show for me I will send everyone online a photo of your boobs.”

Christmas break, I get a knock at my door at 4:00 in the morning. It was the police. My photo was sent to everyone.

I then got really sick and got anxiety, major depression and panic disorder.

I then moved and got into drugs & alcohol.

My anxiety got worse. I couldn’t go out.

A year past and the guy came back with my new list of friends and school. But at this point, he made a Facebook page; my boobs were the profile pic.

I cried every night. I lost all my friends and respect people had for me… again.

Then nobody liked me. I got called names, I got judged.

I can never get that photo back. It’s out there forever.

I promised myself never again.

I didn’t have any friends and I sat at lunch alone.

So I moved schools again.

Everything was better even though I still sat alone at lunch in the library every day.

A month later, I started talking to an old guy friend. We texted back and forth and he eventually said he liked me.

He led me on; he had a girlfriend.

Then he said, “Come over; my girlfriend’s on vacation.”

He hooked up with me. I thought he liked me.

1 week later I got a text: “Get out of your school.” His girlfriend and 15 others came – including himself. The girls and 2 others said, “Look around. Nobody likes you… in front of my entire new school.

A guy then yelled, “Just punch her already!”

So she did. She threw me to the ground and punched me several times. Kids filmed it. I was all alone and left on the ground.

I felt like a joke in this world. I thought nobody deserves this. :/

I was alone. I lied and said it was my fault and my idea. I didn’t want him getting hurt. I thought he really liked me, but he just wanted the sex.

When someone yelled, Punch her already,” teachers ran over. But I just went and laid in a ditch and my dad found me. I wanted to die so bad.

When he brought me home I drank bleach. It killed me inside and I thought I was going to actually die. An ambulance came and brought me to the hospital and flushed me.

After I got home all I saw on Facebook was, “She deserved it.” “Did you wash the mud out of your hair?” “I hope she’s dead.”

Nobody cared. I moved away to another city to my mom’s. Another school. I didn’t want to press charges because I wanted to move on.

6 months have gone by, and people are posting pictures of Clorex bleach and ditches and tagging me in them. (I was doing a lot better too.) They said, “She should try a different bleach,” “I hope she dies this time” and “Isn’t she so stupid?” “I hope she sees this and kills herself.”

Why do I get this? I messed up but why follow me? I left your guys’ city.

I’m constantly crying now. Every day I think, ‘Why am I still here?’ My anxiety is horrible now. I never went out this summer. All because of my past. Life’s never getting better: I can’t go to school, meet or be with people. I’m constantly cutting. I’m really depressed.

I’m on anti-depressants now and counselling.

A month ago this summer, I overdosed and was in the hospital for 2 days.

I’m stuck. What’s left of me now? Nothing stops. I have nobody. I need someone 🙁

My name is Amanda Todd. Her suicide note (as seen above):

Dear Kelsey,
If you found this, then I killed myself.

I killed myself because I was being bullied and Mom is an alcoholic and Dad is a druggie. No one except you cared about me. Can you do me a favor and post this on Tumblr as my final wish? I want them to know that society killed a [15] year old, but they probably don’t care anyways. Can you please hold my hand until the ambulance gets here? I want you to know that you weren’t just my older sis, you were my best friend. Please tell Mom to stop getting drunk every day and tell Dad that he needs to stop doing drugs. And I want you to have Mr. Bear to remember me by. I love you Kels and I always will. I am still wearing that heart necklace that you gave me when I was 8. I hope you have the other half still.