The Deep Web, the Dark Net, and the Dangerous Secrets of Pedophiles 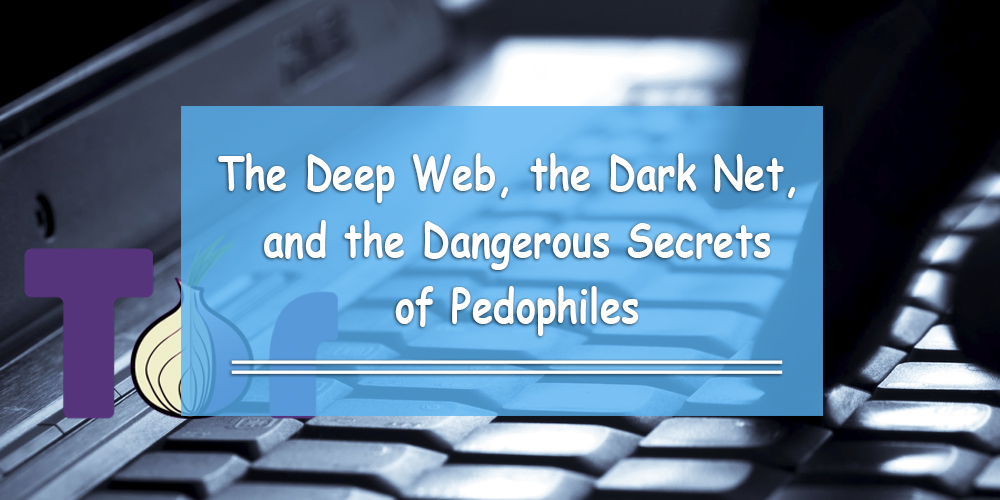 Did you know that only 0.03% of the entire Internet can be found on search engines? The information found on Google, Facebook, and Wikipedia combined represents just a tiny fraction of one percent of all the information available on the Web.

If that statistic shocks you, you must be thinking, “Well, what about the other 99.97%?”

This percentage makes up what Internet security researchers call… the Deep Web.

What Is the Deep Web?

According to ICDL Arabia, the Deep Web is a hidden part of the Web in which information is protected by passwords and where membership is often by invitation only. This information cannot be traced by search engines and contains all kinds of database information, emails, banned books and censored information that search engines filter out of their systems.
To access this part of the Internet, you need to download The Onion Router (TOR), which is an anonymous network that disallows people to track your identity.

Not many people access the deep web, for at least one of these reasons:
1. They don’t know it exists yet (which you now know if you’ve read up to this point).
2. They don’t know how to get access to it.
3. They know how dangerous the Deep Web is.

The Dangerous Part of the Deep Web

The Internet can be a very dangerous, especially for people who aren’t aware of the things that happen online. Online predators use social media to groom (and sometimes even radicalize) kids, as they can be easily swayed into doing what cyber criminals want.

However, there’s a darker part of the Internet inside the Deep Web that doesn’t just allow people to access private information, but also contains some of the worst things on the Internet. This includes things like child pornography websites, videos of beheadings, and online communities that promote black markets for illegal drugs.

People refer to this section as the Dark Net.

Needless to say, there’s a reason why it is the deepest and most dangerous part of the Internet and why search engines make this type of content ‘invisible’ to the mainstream public. However, we cannot pretend it’s not there. We need to find ways to raise awareness about this section of the Internet to protect children from being lured to this section of the Web, particularly from child molesters.

…And cyber safety specialists have been doing research to do just that.

5 Things an Undercover Researcher Learned inside the Dark Net

In 2015, a reporter downloaded the TOR program and investigated the Dark Net herself. Using a fake username, she dug deep and found a lot of valuable information that adults and kids alike need to understand about the Dark Net, particularly when it comes to child molestation.

Why child molestation? Because that represents the majority of Dark Net visitors. (In 2014, Wired reported that over 80 percent of Deep Web visits were related to child pornography.)
Some of the things she found are astonishing!

Here are some of her horrifying lessons she learned:

1. The Dark Net Is Full of Active Pedophile Communities

Did you know that child molesters have their version of Wikipedia? It’s called “Hard Candy,” and anyone can update and/or add information to the site’s pages. They upload all kinds of content specifically for pedophiles, including images, videos, links to discussion forums, and ‘child love guides!’ (Refer to Point #4 for more information.) Most people in the world would agree that pedophilia in general is sick and it makes your stomach turn upside down. However, child molesters use the Dark Net for different reasons… and there is actually a major ‘divide’ within their community because of it.

When the researcher was on 7axxn – a community of over 90,000 registered users – she found that most people simply fantasized about being with children and ‘loving’ them. In other words, they distinguish themselves from the people who intentionally try to hurt children, kidnap them, and/or force them to do disgusting things on camera. These people insist that they want to be in a ‘mutual’ relationship with a minor, even if they cannot give consent by law.

However, a smaller (and more dangerous) subgroup believes that these child ‘lovers’ are no different than they are. They don’t believe in having ‘mutual’ sexual relationships and sexually assault innocent children anyway.

3. Pedophiles ‘Hurt’ Children and Film it on Purpose

4. Child Molesters Have a Handbook

Remember in Point #1 that mentioned how pedophiles have ‘child love guides?’

Apparently, these handbooks provide other (newbie) online predators with advice. Most of the content includes justifications for pedophilia, but it also advises them how effectively hide their infatuation with children from others.

Other ‘helpful hints’ include:
• Use the acronym ‘CP’ instead of child pornography
• Use the term ‘young friends’ when referring to children you have abused or want to abuse
• Delete any suspicious posts from people who try to collect information from you in an effort to reveal pedophiles’ secrets

Of course, this point alone debunks any claim from online predators who want to be perceived as ‘normal’. They deliberately create these books to protect their community (and themselves) from being caught by the law enforcement and Child Protection Centers, whose job is to report child abuse crimes to the police.

Aside from the fact that TOR routers already give online predators a lot of protection, child molesters are very good at hiding themselves.

People in the Deep Web and the Dark Net are very open about what they want to do to children. However, they’re also very careful about not mentioning where they are located. TOR routers already hide IP addresses so they cannot be tracked by the police. So it is close to impossible to stop pedophiles from posting illegal content across the hidden reaches of the Dark Net.