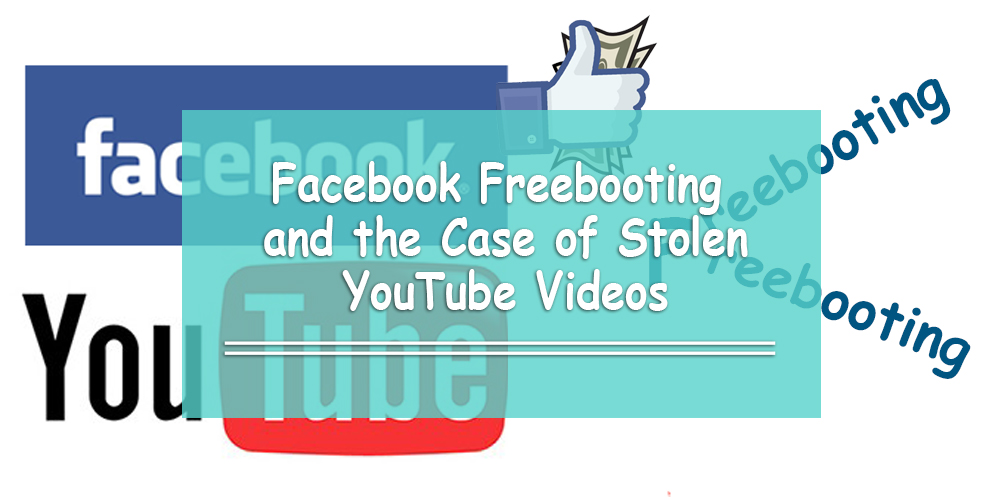 Freebooting is a term we use quite often when it comes to copyright infringement and piracy. In the UAE (and the rest of the GCC), we use it when people copy movies onto DVDs and sell them for cheap prices. This practice is illegal. Why? Because the content is not theirs and because movies are copyrighted so no one else can make money from them.

Fast forward to a later part of the Digital Age. We now see freebooting happening everywhere on social media, particularly on Facebook. In fact, internet blogger Brady Haran calls the concept Facebook Freebooting, as the platform turned this problem into an online epidemic. Facebook freebooting is the downloading of videos from a social media platform and re-uploading them as your own… without the permission of the content creator. People do this with popular YouTubers’ content and viral videos in order to increase their Facebook page likes and expand their outreach, and/or make profit from the videos.

Many companies have done this, by the way. Some of them will download the video and upload it in its entirety, and others will upload it an intro or their own watermark to make it appear like it’s theirs. (There is a video linked in the Sources by H3H3 Productions that explains how one of the most notorious social media users freeboots content from social media and puts it on his Facebook page; scroll all the way down to the ‘Sources’ at the end of the article to watch it.)

Destin Sandlin has a YouTube channel called Smarter Every Day. He makes educational videos related to science; watch them if you want to know how cool science can be.

Why does this happen? There are many reasons for this. However, the most important thing to note is Facebook’s algorithm prefers videos directly uploaded to Facebook. Based on their business model, Facebook wants users to stay on their platform as long as possible. And since Facebook is in direct competition with YouTube, Facebook encourages people to use their platform as their main source to upload videos. In other words, if someone were to upload a YouTube video to Facebook, it doesn’t get any exposure whatsoever. Furthermore, Facebook’s business model makes it difficult for YouTubers to simply upload their content on Facebook and expand their outreach. YouTube user Derek Muller created in a video entitled, “The Problem with Facebook” on his channel Veritasium. He summarized it perfectly when he said: “On YouTube, creators are paid for every view of their content, whereas on Facebook it’s the opposite. Creators actually have to pay for views.”

This creates incentives for immoral businesses: they can steal content and upload it with no negative consequences at all. When they are caught, Facebook simply tells them to take the video down. However, the views the Facebook bootleggers gained (i.e. likes, exposure, etc.) don’t go away. Not to mention the indirect sales they make once they’ve gained new fans and the profit Facebook makes.

Facebook bootleggers got away with a lot before 2016, not just because it was hard to track your videos, but because the reporting process was hard.

According to In a Nutshell’s viral video, “How Facebook is Stealing Billions of Views” the process of claiming your copyright on Facebook before 2016:

1) You get an email or tweet from a fan that gives you a direct link to your video uploaded by someone. (It’s not possible to search for your videos on Facebook yourself, as you cannot just search for them. You have to depend on luck to find your stolen videos.)

4) Watch the views on your stolen videos rise.

5) Facebook finally pulls the video. (Conveniently, the video has already gained 99% of all the views it will ever get.)

It’s no wonder why Facebook had a problem with bootlegging. However, something still needed to be done… and Facebook eventually did something about it.

They created a feature for publishers called Facebook Rights Manager. It allows you to upload reference files for videos and then scan Facebook and see if people uploaded any videos that contain your content.

Here is a screenshot of what will find once you apply and get accepted. For every video, you will receive a list of ‘matches,’ as seen below. (Note that this is only for duplicate Facebook videos; YouTube videos can still be stolen and re-uploaded if the creator chooses not to upload them on Facebook.)

Call to Action: Let’s Stop Facebook Bootlegging in the GCC

As avid consumers of online videos, what can we do to prevent Facebook bootlegging?

Well, you can do a number of things:

1) If you spot stolen content of FB, make a comment linking to the original content. Alert the original creator, because only they can file a copyright report.

3) Encourage your friends and family to do the same. This will help people learn more about Facebook bootlegging in the region. Piracy is a very serious issue, and some countries are actually taking action

4) Share this article on social media. Help spread awareness about the issue of Facebook bootlegging so that we can give credit only when credit is due.

We all want the same thing: a free internet based on creativity and community engagement. Stay active on social media and let content creators know when someone is stealing their content. To all those who upload the great content we enjoy, don’t hesitate to file a police report if someone else steals your intellectual property.

Sources:
H3H3 Productions: “In Response to SoFlo” (viewer discretion is advised, as it contains adult language)
Hank Green: “Theft, Lies, and Facebook Video”
VTREP: “What is video freebooting and can it be prevented?”