Phubbing: Are You Being Anti-Social with Your Smartphone? 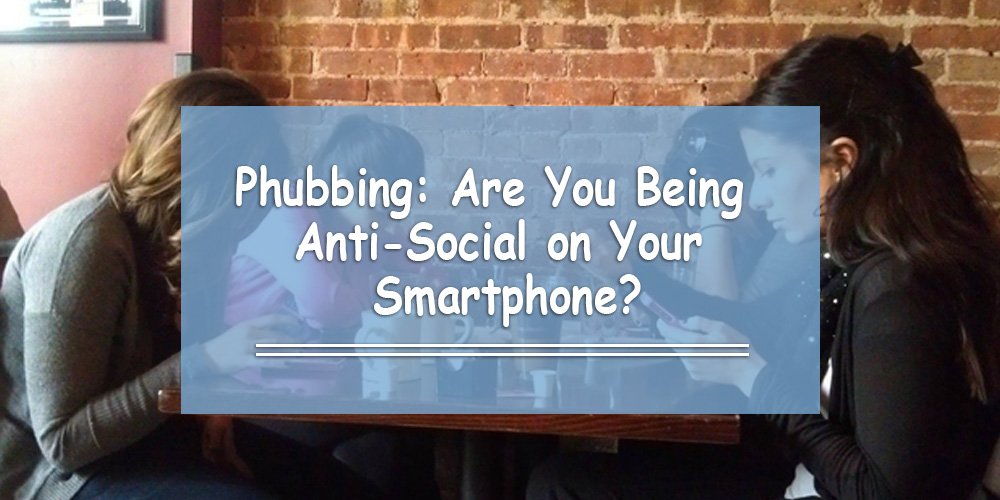 We have reached a new problem since the arrival of the smartphone. We have become more connected… through our smartphones. However, as a result, we have become more disconnected to our surroundings. Whether it’s scrolling our newsfeeds as we ignore our friends at gatherings or texting our friends at business meetings, it seems like we’ve become a more arrogant, self-centered bunch as we spend more time hooked on our phones.

This led to the creation of a word to describe this phenomenon. We call it… phubbing.

Phubbing is short for ‘phone snubbing’. It is a term used to describe the habit of ignoring someone in favor of a mobile phone. It usually becomes a problem when there is someone right in front of you trying to get your attention.

People who ‘phub’ (often called ‘phubbers’) use their smartphones to:
• Scroll through their newsfeeds: This is the most common one, and probably the worst one. Nothing says you’re bored more than getting out your phone and checking to see what your friends posted online when you have company.

• Update their status: This could be as innocent as posting a selfie on Instagram. While you may be included, they are ignoring you momentarily by expressing themselves to all their social media connections.
(This could be hurtful even if you’re in the photo.)

• Text someone: They could be having a conversation (or multiple conversations) while the person they’re hanging out with is in their physical presence.

• Play online games: Playing Angry Birds, Candy Crush, or any other game on a mobile app can exclude people. Phubbers can get very addicted to them… especially if you collect points every time you play.

(Some forms of phubbing don’t require the use of the Internet. You could be on a phone call or send SMS messages and still have little to no consideration of the person you’re with.)

This happens everywhere. Most likely, you’ve seen phubbing incidents take place in restaurants, but there is footage of people phubbing in the most embarrassing places:
• During a job interview
• In a business meeting
• Family get-togethers, social gatherings
• Live events (football matches, concerts, etc.)

A Story about the Word ‘Phubbing’

Did you know that a very diverse group of people decided on calling the concept of phubbing?

In May 2012, a group of intellectuals came together at Sydney University in Australia. Among these people included:
• A lexicologist (a person who studies the formation of words)
• A cruciverbalist (a professional crossword maker)
• A phonetician (a person who studies speech sounds and written symbols)
• A debating champion
• A poet
• Several authors

Their mission was to create a word based on this wordy definition of ‘phubbing’:
noun “the act of holding a mobile phone in a social setting of two or more people, and then interacting with that mobile phone and not the people in that setting.”

The group finalized their decision and went with the word phubbing.

Take a look at this all of the countries who use the word phubbing on social media: Do you notice something missing in this image? (Hint: take a look at the Middle East region.)

Aside from the UAE and Egypt, it seems as if the MENA region has not joined the phubbing movement yet. This is shocking, since many GCC countries have some of the highest internet penetration rates in the world:

• Over 90% of the populations in Bahrain, Qatar, and the UAE (respectively) use the Internet.

• Kuwait is nothing to dismiss either: its Internet penetration rate is 80%.

• Saudi Arabia dominates social media viewership in the GCC. They are ranked #2 in the world for Snapchat penetration among Internet users. At one point, they were the world’s most avid watchers of YouTube.

There is no question that the majority of the GCC uses social media on their phones… and phubbing almost always follows in suit when people have access to the Internet anywhere they go.

(It might be a good idea to recommend a digital detox for a couple of days, just to help them learn what it feels like to be without your smartphone.)

Here are some more worldwide statistics on phubbing (all according to stopphubbing.com): What You Can Do to Stop Phubbing?

Let’s be honest here: we’re all guilty of phubbing sometimes. We just need to stay conscious of it when we do it.

Here are a few tips to help you stop phubbing on your own:

1. Remove the temptation: You don’t need your cell phone all the time. Keep your phone tucked away during meals and meetings to help separate yourself away from the virtual world.

2. Acknowledge the distraction: If you must use your phone, let the person know what you’re doing. Also, leave the scene momentarily and then come back. Not only will this prevent the phubbing from spreading to the people you’re hanging out with, but it will also hold you accountable for the actions that you take and it shows that you really do cherish the company of the people around you.

3. Set Rules: As much as we hate rules, setting a system can help both you and your peers to resist the urge of phubbing. One good example you can use is to have everyone put their phones on a table for everyone to see and having the first person who takes their phone receives some sort of penalty (i.e. paying for someone’s meal, doing a favor, etc.)

Phubbing is an issue that’s going to get more prevalent and more dangerous in the future. That is, if we aren’t conscious about it and staying active. If you’ve been feeling distanced from your loved ones recently, take an honest look at your daily phone habits. Just remember to put the phone down and look around you more often. You might be surprised by what you’re missing out on.