Snap Inc. Cracks Down on What You Can Discover on Snapchat 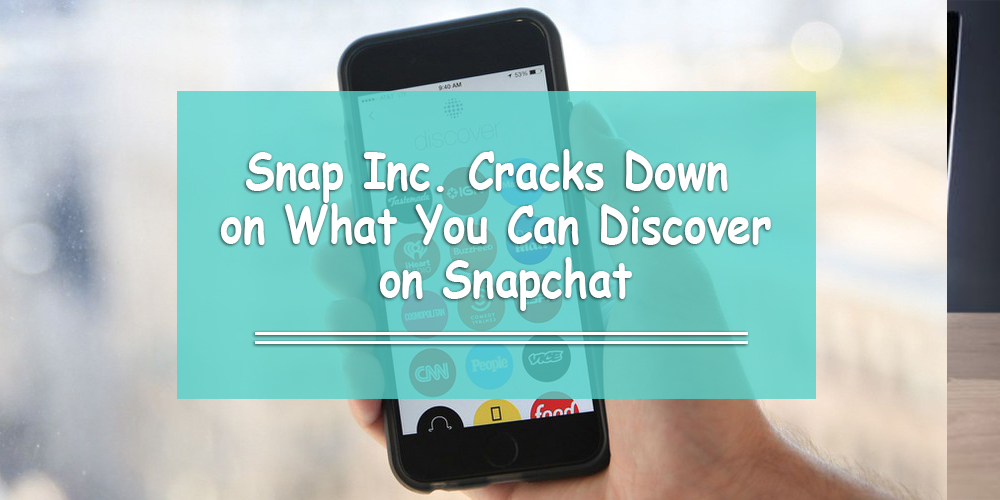 When people think of Snapchat, they think of a fun platform for people to chat with their friends and send fun images and videos of themselves. However, as time went by and Snapchat established itself as one of the biggest social media companies in the world, they created a ‘Discover’ section on their platform.

Discover allows major media companies to use Snapchat to report live events and to reach out to huge amounts of young people, while it also tune into current events news and leverage a larger reach to young people.

Discover is a wonderful news service for Snapchat users. There’s just one problem, and it’s spreading like wildfire: In an effort to attract viewers and to appear in the spotlight, media companies purposely use controversial headlines and/or images and videos that have nothing to do with the article to entice people to their website. People refer to this concept as clickbait, a technique that’s part of the unprofessional side of reporting news called yellow journalism.

The Story on MTV News Everyone’s Talking About In mid-January 2017, MTV News posted a Snapchat story on Discover with the headline, “Is this the thirstiest person on earth?” The image linked with the article had a picture of a blond woman in a swimsuit taking a selfie.

This had absolutely nothing to do with the article. When you tapped on the image, you would be directed to an article about a fully-clothed man.

Some Troubling Statistics Can Get Snapchat in Trouble Media companies plaster the Internet with fake news and clickbait articles nowadays, even some of the mainstream ones. It has come to a point where social media users don’t know what to believe anymore.

In December 2016, the Pew Research Center reported that:

• 88% of U.S. adults believed made-up news has caused them either “some” or “a great deal” of confusion.
• 60% said they either “somewhat confident” or “not very/at all confident” of their ability to recognize made-up news.
• Nearly one third (32%) of the same people claimed they often see made-up political news online.
• 51% said they often see news that not fully accurate.
Fake news is running wild on social media, as the world continues to pressure websites like Snapchat to roll out new tools to ensure that their users get access to accurate information.

Moreover, they demand that Snapchat does something combat the amount of sexual content their partners post on the platform, as well. As a matter of fact, a 14-year-old (and his mother) sued Snapchat in 2016 because its media partners posted highly sexual content.
According to Quartz, the lawsuit cited several articles from Vice, BuzzFeed, and Cosmopolitan, with the following headlines:

• “I Got High, Blown, and Robbed When I was a Pizza Delivery Guy”
• “F*** Buddies Talk About How They Kept It Casual”
• “People Share Their Secret Rules for Sex”

Needless to say, these headlines are inappropriate for children… and this is just the tip of the iceberg. According to the New York Times, Discover also altered images from Disney movies in a sexualized way and displayed a post about an artist who let artists touch her genitalia.

Because Snapchat’s media partners have editorial independence, they technically have a lot of freedom to post whatever they want. A BuzzFeed spokesperson said this:

“The content we share in our Snapchat Discover channel is part of our frank and well-loved coverage of the whole range of human experience […] The notion that positive, frank, and humorous coverage of sex is obscene could only occur to someone who has literally never looked at the Internet.”

This may be true. However, these media companies don’t take certain things into consideration. Cultural factors, for example, play a major part in people’s values, especially in the Arab World. Many parents and policymakers do not agree with the idea that teenagers can view this type of content, particularly at such a young age.

Add the fact that people do not know what they will get when they click on an article, as well. People in the GCC will become very skeptical of Snapchat’s Discover section.

On January 23, 2017, Snap Inc. (Snapchat’s parent company) made a few edits to its guidelines for publishers with regard to Discover.

Media companies will no longer be allowed to post risqué or misleading images. To be specific, Snapchat now “restricts publishers from posting questionable pictures on Discover that don’t have news or editorial value.”

Snapchat also mentioned that all content must be fact-checked and accurate. This prevents publishers from including reports or links to outside websites that could be considered fake news.

These changes will, according to Snapchat’s Rachel Racusen, “empower our editorial partners to do their part to keep Snapchat an informative, factual and safe environment for everyone.”

More good news: Snapchat said that, by February 2017, Snapchat will have a tool to allow publishers to allow age-gate content. This means that publishers have the power to determine whether young teens can watch or read the content they post.

They also mandated that all headlines and images should be appropriate for an audience as young as 13 years old. Discover continues to gain interest, from both publishers and Snapchat users. With new rules implemented into Discover’s guidelines, Snapchat hopes to make the platform a safe environment for all users, including young teens. These move can help eliminated all the fake news, clickbait articles, and inappropriate content and encourage users to engage on the network not to attract attention… but because it provides value for their users.