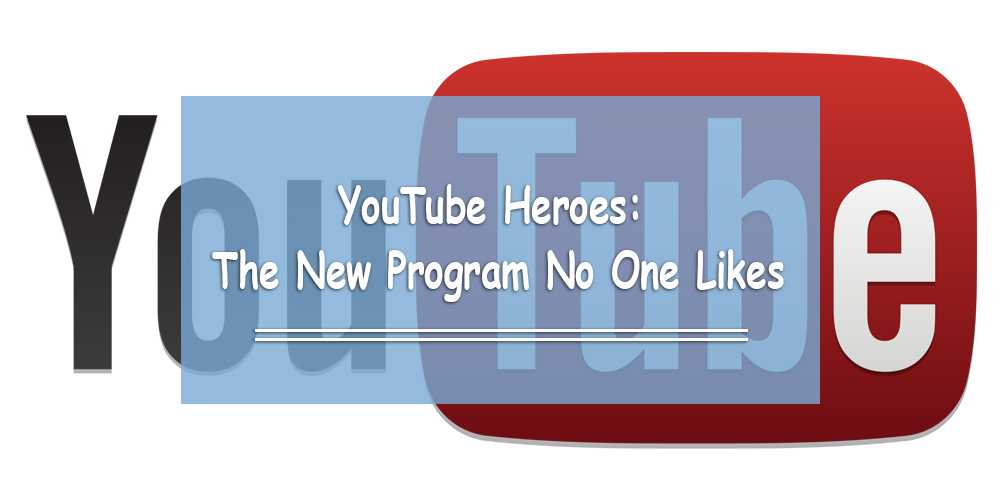 So, if you’re part of the YouTube community or follow social media trends, you may have heard that YouTube is going to launch a new program called #YouTubeHeroes. It received a LOT of criticism to say the least; it’s received nearly 1 million dislikes as of February 2017.

(Watch the video if you don’t know what it is yet.)

As YouTube community members, many of us watch several YouTube videos every day. Because this impacts a number of people who have stayed loyal to YouTube, we believe it’s important to take a stance on the issues. There are some good things and some bad things, and we’d like to highlight them both in this message.

First, we would like to point out some of the good things:
1. Transcriptions: Most content creators didn’t discuss this in their video. Captioning videos and providing time-synced text is the best alternative to audio, and many people benefit from them. Whether you’re in a sound-sensitive environment or use it to better comprehend the content you’re watching, it ultimately improves the user experience. (Plus, it could also make it a lot easier to translate content into different languages.)

2. Gamification: Holistically, this is a great concept to motivate YouTube users to regulate their own community. In a way, they’re giving back and showing appreciation to the people who watch the same videos. Rewarding people for these efforts by giving them exclusive offers/sneak peaks at new products is undoubtedly a good thing.

3. Communities: People also have a motivation to use YouTube’s forums. The more people talk about unresolved issues, the more creative and collaborative we can be. (That is, if we can have honest discussions about them without getting penalized.)

More importantly, however, are the harsh criticisms YouTube has received. We believe YouTube needs to be more forward in what kinds of videos YouTube Heroes should report. Right now, it is still quite vague, which explains why many people are outraged by the decision to allow YouTube users the privilege of flagging a video.

-What if these ‘heroes’ take advantage of these privileges and starting flagging videos of content creators they simply disagree with?

-Will these ‘heroes’ lose privileges if they do take advantage of trying to take these videos down? (Will they get a ‘three-strike’ rule the way YouTube’s content creators do, for example? Will they be put in a penalty box where they can’t flag videos anymore? Etc.)

-How will mass flagging work? How can it be prevented?

These are some of the critical questions YouTube (and its community) needs to have a discussion about.

Using gamification for certain aspects of YouTube is a good idea. It allows the YouTube community to run itself. It can potentially solve problems to which several YouTubers have spoken: plagiarism, removing ‘extremist’ content, and the inconsistencies of flagging videos (just to name a few).

We thank you and admire the effort you put into trying to provide a tangible solution. However, this strategy needs to be moderated and implemented fairly… and that can’t be done by simply allowing anyone to moderate the community.

If you’re looking for the community to help, I’m sure many people would love to do so. However, we need to be assured that ‘heroes’ (or a group of heroes) who flag videos are doing as objectively as possible with minimal cognitive bias.