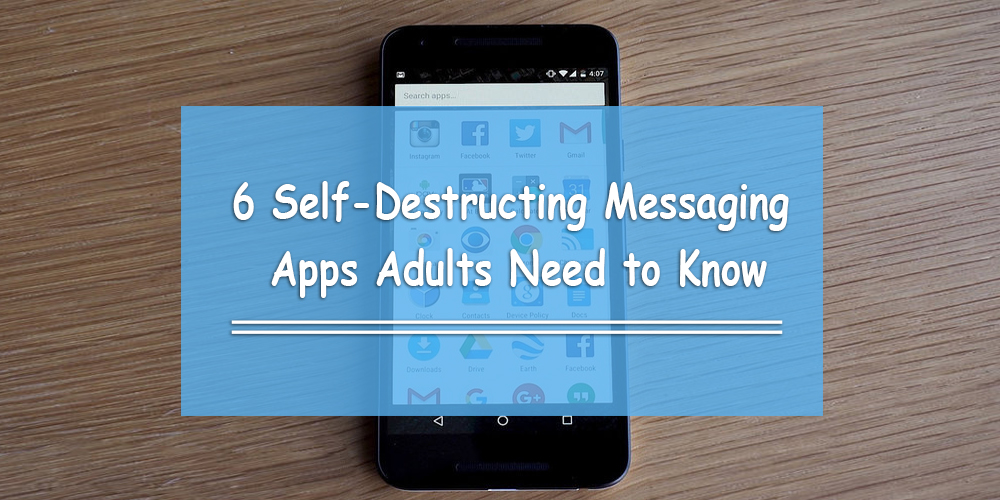 Let’s face the facts: most kids don’t spend a whole lot of time on Facebook and Twitter anymore. We know this because people don’t want their information shared with the entire world.

Self-destructing messaging apps with end-to-end encryption are taking over; these are apps that automatically destruct messages when the receiver reads them and/or sets a limit for how long the receiver can see a message before it gets deleted. Both kids and young adults use them to prevent certain people (i.e. parents, and future employers, etc.) from seeing things in their chat histories.

These apps are dangerous in their own ways. Some of them aren’t as private as they say they are, while others might be too powerful for their own good. We chose the 6 that give you the most variety in their usage and the ones we can all learn from the most.

So without any further ado, here are 6 self-destructing messaging apps your kid might have on their phone. We’ve all heard of Snapchat. (It is the ultimate self-destructing messaging app.)

Snapchat is one of the most popular social media platforms in the world and is by far the most well-known self-destructing messaging app out there. It’s so well-liked within the younger generations that, in 2016, Snapchat surpassed Facebook’s number of video views per day (10 billion vs. 8 billion).

It attained its popularity once people learned they had the option to share videos and photos in a ‘safe’ online environment with all kinds of lenses and face effects. You can set timers for these photos and videos to self-destruct once the person received it.

This allows teens and young adults to share goofy or embarrassing photos without the risk of them going public.

Learn more about Snapchat in their video: In a nutshell, Telegram is WhatsApp with the ability to self-destruct messages. Wickr is a private messenger worth discussing… for good reason.

In one of their YouTube videos, they mention how end-to-end encryption is important, but it doesn’t tell the full story. The real challenge is to distribute the user’s encryption key securely; an encryption key is what turns the data in your text message into an unreadable text, making it impossible for the human brain to understand.

Wickr has not one, not two, but five different encryption keys for every message you send. It goes above and beyond limits by not only encrypting the message, but by adding more layers so that the sender knows that the recipient is the only person to decrypt the message.

In cryptography, this is called perfect forward secrecy. No one will be able to surveil the messages you send: not the FBI, not the NSA, not even Wickr themselves!

Check out the video below: Cover Me is another cool self-destructing messaging app, for one main reason. Rather than letting the app or the sender decide when to delete the message from the recipient’s phone, the app lets the receiver delete the messages.

You can even recall them if they haven’t been read, similar to recalling an email that you sent to someone by mistake. SpeakOn’s self-destruction techniques are the same as the ones above. You can delete messages automatically, you can set timers for when to destruct the messages, etc.

For one, SpeakOn’s chat application has an Automatic Translation feature; it supports over 90 languages. Even if you’re not interested in the self-destruction part of the application, if you cannot speak Arabic, this application can communicate with locals in the Arab World.

Bleep is another one of those self-destructing messaging apps that stands out on its own because of its features. The most distinct one is its ability to allow users the option to log in through their mobile number, email or to go incognito.

So not only does the feature include end-to-end encryption, but you can also post anonymously.

As you can see in the video above, Bleep users have the option to send messages or to ‘whisper.’

If you whisper something to a friend, they will not be able to take a screenshot of the chat history. You can only do that if you message someone. (Notice in the image below that the person who’s texting you cannot be seen. It’s just the first initial.) There’s also a third way to communicate on Bleep: phone calls! This part may remind some people of a Skype or Viber. We mentioned ‘whispers’ when we talked about Bleep.

Don’t confuse this with the Whisper app.

If you’ve heard of Whisper before, you may be wondering why it wasn’t on this list.

Well, unfortunately, this list was about self-destructing messaging apps. (Whisper is definitely an app worth talking about

Just in case you need a summary, though:

According to Common Sense Media, Whisper is a social ‘confessional’ app. It allows users to post whatever’s on their minds anonymously. Whisper displays the text and automatically retrieves an image from their own search engine; a user can manually upload one of their own if they like.

Whisper gets a lot of attention specifically because it provides an outlet for teenagers. It gives them the freedom to share their feelings (among other things) without fear of judgment. Burn Note was one of the emerging self-destructing messaging apps that erased messages after a set period of time. It started around the same time Snapchat did.

Unlike other apps, though, Burn Note limited itself to text messages. Users could not send pictures or videos.