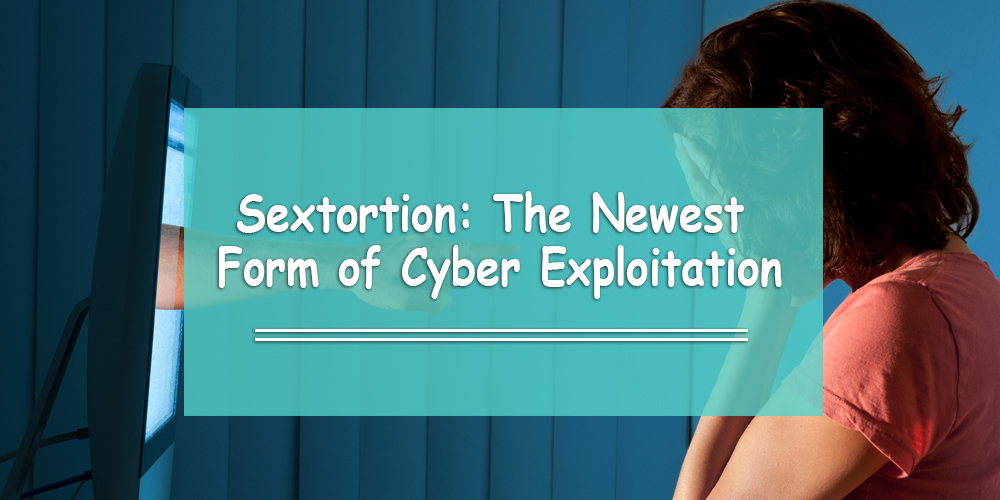 Sextortion: it sounds like a made up term, right? Not only is it a real problem, but it relates to a lot of sex-related cybercrimes that happen on a daily basis.

Cyber exploitation in the form of sextortion happens quite often, and your students could be at risk to it if they aren’t careful and aren’t aware of what they do and who they talk to online.

Sextortion (in English) combines the words ‘sex’ and ‘extortion’: “the crime of obtaining something from someone by the use of force or threats.” Sextortion is a form of cyber exploitation in which an online predator threatens to distribute someone’s private material, particularly if you don’t provide them sexual favors or inappropriate images of yourself over the Internet or phone.

The FBI released a brochure that has more information on sextortion. It states that sextortion occurs when someone:
• Threatens to release or distribute material to people the victim wishes to keep private.

*This means that if a child adds a stranger on social media, or a hacker finds out something about a child that he/she doesn’t want others to know, the stranger could use that information to get the child to do sexual favors for him.

• Threatens to financially harm friends or relatives of the victim by using information obtained from the victim’s [electronic device] unless they comply with their demands.

*In other words, someone could claim that they have access to their family’s banking information. Then, they’ll say something like, “If you don’t do the sexual favours I tell you to do, your family is going to lose all their money.”

• Withholds something the victim needs or wants unless they comply with demands.

*This type of extortion happens when someone is in a position of authority, or even pretending to be. For example, someone could pretend to be the police or a parent’s boss and threaten a child that something bad will happen if they do not follow what they say.

Also, note that sextortion – or any other form of cyber exploitation for that matter – does not necessarily involve sexual intercourse or even physical touching. Because many cybersex crimes actually happen and stay online, the International Association of Women Judges explains that it also includes, “unwanted sexual activity such as exposing private body parts and/or posing for sexual photographs.”

Who Are the Perpetrators of Sextortion?

You may think that most people who commit sextortion crimes are strangers sitting behind their computer halfway across the world. This is not always the case. Although these scenarios definitely happen, research has found that many of these sextortionists are people who actually know the child personally! (Pundits claim that the offenders prefer to contact the child online instead of face-to-face because they are less likely to get caught.)

The vast majority of these criminals are male. Many of them are hackers and understand the Internet very well. They use that knowledge to fulfill their sick fantasies by contacting multiple children. Some of the criminals who have been prosecuted have sextorted over 100 victims!

Who Are the Victims of Sextortion?

Sextortion affect children, as they are most vulnerable. People across all demographics are at risk, meaning both boys and girls are exploited. The average age at the time of the incident was approximately 15 years old, despite a wider age range (8-17 for girls, 11-17 for boys). Overall, about 71 percent of sextortion cases involve victims under the age of 18, according to the Brookings Institution.

Also, according to the FBI, people will see a change in how children act around people. They will withdraw from family members and experience a combination of psychological trauma, emotional trauma and self-harm.

They are also more likely to drop out of school and are at higher risk of getting cyber bullied and committing suicide.

This information about sextortion offenders and victims can be found in the Brookings inforgraphic below.

Call to Action: What You Can Do to End Sextortion

As a contributing member of society, what can you do to make sure that sextortion does not happen to children in the Arab World?

One of the reasons why sextortion is such a major issue in the online world is because everyone stays silent. This may be a taboo topic to discuss, but there is no question that we should protect kids where we can. Discussing the sextortion problem with your kids – as well as your friends, family and colleagues – will help raise awareness and immediately encourage people to take action themselves.

Now that you are aware of what sextortion is, it’s time to find out more about it. As educated people living in the Digital Age, we have access to all kinds of resources. Right now, the Brookings Institution’s sextortion report (May 2016) is the first of its kind. Be sure to check that out, is bound to be more information.

(Feel free to contact us if you know of any other valuable sources you have found, as well. We’d love to hear more from you.)

Sexual abuse, sexual harassment and sexual exploitation are major issues that governments try to resolve on a daily basis. With the Internet and social media being a relatively new field, it is important that we let them know where the gaps are.

Be advocates for change by contacting the government entities in your country and letting them know that you want to advocate for stronger laws against online sex offenders. You can contact the Ministry of Interior to implement stricter and more modern sextortion policies, along with the Ministry of Education to provide training for teachers and students.